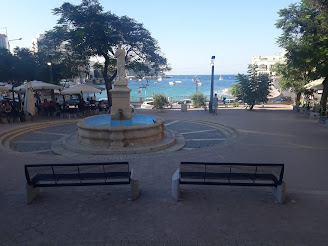 What are we guided by and what are we suffering most from?
Read this story, read about my encounter and allow your thoughts.

Bench under the olive trees

Recently I was sitting in a small, cozy park on a bench under the olive trees. In the shade, because the sun had meanwhile managed to push the day well above thirty degrees. No weather for physical exertion, but in the shade with a breeze from the sea it is wonderful to think and to write.

It was very quiet in the park. A mother with a baby in a pram and another child playing, a group of young people who were talking to each other and me on that bench, in my thoughts. The buzz of those present, supplemented by that of the passers-by, was occasionally drowned out by noisy engines and honking cars. All that sound combined became a monotonous mantra that I moved to my background and allowed my ideas to mature.

In time, a very elderly couple appeared in the park. He wore a face mask that covered almost all of his face. She had no protection whatsoever. Together they shuffled around and visibly hesitated about which bench to sit on. There were not really many free benches that were completely in the shade. And sharing a bench is undesirable in this corona period. In Malta, a physical distance of two meters applies and I estimate that the benches are barely more than two meters.

Eventually they settled down on their bench about thirty meters away from me. The foliage of the olive trees that shaded their bench was noticeably thinner than the one above my bench. For a moment I hesitated whether I would offer this adorable eighty - or maybe ninety plus couple, my bench. This thought disappeared in seconds and I added some more lines to what I was writing.

Out of my consciousness

Time passed and the elderly couple faded from my mind until suddenly I noticed that they had risen again and they were moving in my direction. For a moment I thought they might be planning to sit next to me on my bench, because they thought it was getting too hot. However, I soon understood. The bench right next to me had become available. The man who had sat there had left. I saw he had left something behind, but could not really see what it was.

They were on their way to the vacant bench. Slow, but determined. I found myself keeping half an eye out to make sure that in the time it took them to reach the vacant bench, someone else wouldn't sit down who couldn't know what I knew. It was clear to me that it would be their new place.

Fortunately my help was not needed. The woman sat down and gave me a friendly nod. The man did not look at me. He had his eye on that plastic bag.

The old man leaned forward to get a better view of the plastic bag. I suspected he wanted to know what was in it. His wife watched and gave me the impression that it was best she let him do his thing.

I also got curious about the contents of the plastic bag, so I left my writing for what it was and started to concentrate on how this would proceed.

In the meantime the man had gone back to their previous bench. The investigation had expanded by now and I saw him picking up a straw from the ground. A black straw that was left there. Possibly he left it there himself. I couldn't have known.

His wife waited patiently for him in their new place. Once there, he started poking the straw into the plastic bag. Suddenly I realized that he wanted to lift the plastic bag with the straw and take it to a waste bin. Most importantly, it seemed that he did not want to touch the pouch with his hands.

There were three of us. The old woman, the old man and I the slightly less old man. Everyone had a personal feeling about this situation. The woman wanted to let her husband go. The man wanted to throw that bag away before he dared to sit next to his wife. And I looked at it with sorrow. I watched the scene and the messing about with that straw that led to nothing.

I got up and walked over to them. Without saying much, I picked up the plastic bag with my hand and took it to the nearest trash can and threw it away. The man, somewhat disconcerted, followed me with his straw and threw it away too.

After we both had thrown away our piece of waste, everything seemed ready. However, the man kicked off a few ice cubes that had apparently fallen out of the plastic bag, but then sat down next to his wife.

I was glad that he was finally sitting in the shade on the bench next to his patient wife. And in the meantime I too had sat down on my bench and thought about where I had gone with what I was writing.

Suddenly I felt somebody close. As if you are standing next to an artificial doll in a store and it is as if it is a real person and you feel that you are too close.

Anyway, the old man suddenly stood by my bench. He reached out his hand. I stood up and was a bit confused. He grabbed my hand with one hand and my wrist with his other hand. Thank you, he said, while shaking my arm. Thank you for your understanding, for your patience, and for your help. We were in about thirty centimeters distance…

He gave me his name …… .. I looked into his old, kind eyes. I saw his insecurity. He touched me deeply and made me speechless.

Today I am still a bit confused by this encounter ……