From cage to cage 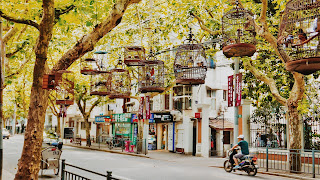 Do you dare to spread your wings to your own freedom?

Recently I was again on one of the many boulevards here, enjoying the light and warmth in this country. From a bench I watched the strolling crowd of people. Everyone with their own reason and with their own goal. Chattering people, silent people. Some holding hands, others trudging one after the other, looking at the ground. Children on skateboards, small groups of joggers who weave their way through the crowd.

At one point my eye fell on an old man, who approached carefully, shuffling. With his arm slightly outstretched, he carried a bird cage in front of him with a cloth over it. Despite that cloth, the animal could not be tied to the beak. “Loud little boy.”: I said cheerfully. And - as usually here when you say something to someone - he immediately drew me into his story. “Yes, this is a champion.”: He said triumphantly. He explained that he was on his way to his buddies for a “Best Whistler” competition. "Nothing official, it's just the honor my friend." Yes, in Malta you are quickly addressed as a friend and sometimes even as a brother. Well, in any case I think it's very friendly.

My so-called friend kept talking and talked extensively about his little bird. He took the cloth off the cage, prompting the animal to whistle even louder. So the little man kept talking while his bird just kept on whistling. It also got louder and they seemed to have started a preview of the upcoming flute match together. I surrendered and was the animated and patient spectator. 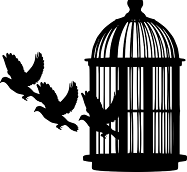 With a little help of some non-verbal and polite signals on my part, the man put the cloth back over the cage and continued shuffling his way. I sat on my bench in the sun for a while and let the ambient noise around me to the background. In that silence I wondered why anyone would want to keep a bird captive. Especially that creature that, in addition to the two-dimensionalspace of movement that humans has, also has a third dimension in which it can move, namely in the airspace. What an enormous extra space a bird actually has in relation to us and how bizarre that people allow themselves to limit that space to a cage with the justification that we do no harm, because it does not know any better and because they claim to take good care of it. That to me feels quite pretentious, if not arrogant.

Anyway, it is by no means my intention to judge anyone. I just realized, sitting on that bench in my two dimensional space, that I would not anymore want to lock up a living being. “Not anymore”: I write, because I have indeed locked up animals. As a small child I had a guinea pig and during my marriage we had horses in a stable. I have always felt the restriction of freedom of those animals, supported by me, latent, even as a very young child.

We allow ourselves and each other freedom, but also limit those freedoms. We live in groups within which social and legal frameworks apply, and that is important, because without those borders, freedom would not exist.

Taking and giving freedom is a responsibility towards each other. It is about accepting boundaries and adhering to the rules of the game. We live up to expectations, fulfill commitments, compromise and so on. Within our personal values and standards. This usually gives a warm and safe feeling. Everything is clear and everyone knows what is allowed, what is appropriate and what is not. That provides support and eases the mind.

We live in cages 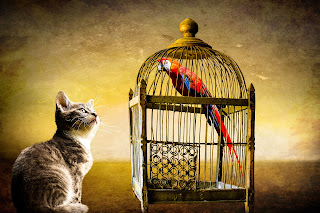 However, it can also feel oppressive over time. One wants more freedom, the other fears too much space. Sometimes you feel that others exercise too much power over you and limit your freedom. I thought about that caged bird again and realized that we all actually live in some kind of cages. It starts in our smallest cage, when we free ourselves from the womb, and it ends in our last cage, the chest. In between, our life takes place and we keep on ending up in different cages. This continues throughout our lives. In all those cages we get to know the rules and the exceptions, but also the controversies.

Always new situations, with constantly changing rules. This is how we flutter through life, from one cage to another. I think the best-known examples of our cages are education, school, work, marriage, friendship, family, club, association, and so on.

If you long for more freedom, or if you fear more space. Then you better do something about it, but how do you get out of your cage and do you dare? Or would you rather wait for better times, safe in your cage, but not being really happy? We are simply afraid of changes.

But the more unhappy you feel, the more the realization grows that you would like to flee. Break out and swerve to something new, but your current cage is still locked. How do you get out and who has the key? Well, I have known those situations many times in my life and they just kept on coming back. There seemed to be no way out. The cages are and will remain closed, well that is anyhow what I always thought.

It often took a long time, but every time that moment came again when I wanted to escape so

badly that I no longer wanted to wait and no longer thought about locks and keys. Sometimes in resistance, or under protest, I eventually found the doors of all my cages and to my surprise it turned out that they were never locked.

I have often lingered in my cages for too long, especially when I was much younger. My excuse was that I thought I didn't have the key, or I thought only others had a key. It was the others who had the keys to let me out or back in, and lock or leave doors locked. And yes, the others do have those keys, but what does it matter?

The most important thing I learned is that there is only one person who does not need keys, because that person itself is the master key. It fits on all the doors of all the cages, in or out. And that master key is me. And I believe that goes for everybody. You are the master key and can fly out of any cage when you want.

The master key to freedom

It is not immediately easier after opening the doors. After all, the ground under your feet disappears and almost all certainties evaporate. You are completely out of your comfort zone. So creepy and so lonely. Where are you going and is there also a way back? And if that way back is there, do you still want to go back? Are your doors still open, or have others closed them in the meantime and would they not turn out to be locked this time? Either way, flying out feels insecure and fearful, but keep in mind that you yourself are the master key to freedom. Fly out to your own freedom. 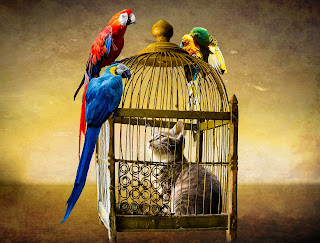 Well, all of a sudden I felt very sorry for that bird again, that champion in that cage, on the way to that competition to win for the owner. I was sitting there on that bench in my sunny two-dimensional wiggle room and I felt sorry for that poor little singer.

I thought, if I can fly out of all my cages, while that winged screamer cannot even walk out of his cage being a flyer… .. Well, it's sad, but that's the way it is.

Later a glass of wine for some distraction ……

Email ThisBlogThis!Share to TwitterShare to FacebookShare to Pinterest
Topic: Columns